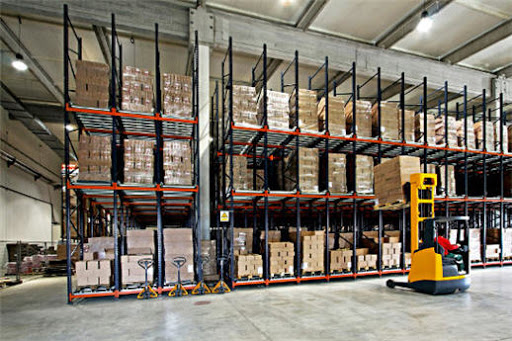 Introduction
Malaria is one of communicable disease that was taken into the global commitment of MDG’s. About 80% of district/municipal in Indonesia has been categorized as the endemic and more than 45% of the population lives in the endemic villages. According to Annual Parasite Incidence (API) indicator in 2010, Papua, Papua Barat and Nusa Tenggara Timur are provinces with the highest API number with sequential values (18,03; 17,86; and 12,14 per 1000 population). National malaria cases during the years 2005 – 2010 tended to decline, from 4.10 in 2005 to 1.96 per 1000 population in 2010. While Tuberculosis (TB) indicator; Case Detection Rate (CDR) in 2010 is 78,3% that reflects the proportion of new smear positive patients found and treated for an estimated number of new patients in the region. Province that has the highest CDR is North Sulawesi followed by DKI Jakarta and Gorontalo (Indonesia Health Profile 2010).
Rationale
The essential medicines such as TB and Malaria medicines should be stored properly in accordance with the premises of building. Improper storage and distribution will result in losses due to damages and possible expiry of medicines. The Directorate General of Pharmaceutical and Medical Devices (DG of Binfar) has the duty and authority to manage supply chain of essential medicines from its procurement, storage, distribution to disposal of expired goods/material. In order to control the storage facilities, Binfar has managed to conduct a routine supervisory visit and monitoring activity each year through the Directorate of Public Medicine and Health Supplies (Direktorat Obat Publik) using national budget. The supervisory visits which were carried out in 33 provinces were conducted in two districts/municipals as sample of each province. So, in a year there are 33 provinces and 66 districts/municipals visited. One of the findings is the poor condition of storage facilities in the field. It was noticed that most of the provincial and district/municipal warehouse do not have adequate and proper storage facilities. Concern was raised on the quality and efficacy of drugs being distributed through warehouse to the beneficiaries (people who seek treatment in primary health care facility) due to poor storage facilities and practices.

This program is intended to strengthening the district warehouses building. It is to improve physically poor condition of building of the warehouses in district/municipal and ensure that medicines are stored under the appropriate environmental condition. Physical renovation of this activity might include the extension of the building, fixing its ‘poor’ condition of roof, wall, floor, etc. Meanwhile, Binfar has got information about renovation budget based on district and province warehouse’s request attached with the actual condition of building, photo documentation and architecture report on renovation needed that expect to be funded by Global Fund.

The improvement to the conditions of pharmaceutical districts/municipal that are less qualified then will ensure that the essential medicines including TB and Malaria program are kept in good condition as required and maintain the quality, efficacy and safety of essential drugs during storage.
Current Warehousing
In Indonesia, a warehouse facility can be a very large medical storehouse at the National level (MoH Central Warehouse) to a moderately sized building in Province and District/Municipal offices, or a simple store room with shelving and small boxes inside government health center (Puskesmas/PHC or Hospital) at the district/municipal level.
The following facilities receive and store some commodities:

Warehousing Issues Identified
As seen by the field officer of Binfar, the following deficiencies are generally found in the warehouses whether provincial or district/municipal storage facilities where the essential medicines are stored:

Principle Guidance for the Warehouse Renovation Plan
The implementation of the Warehouse Renovation Plan is tied to the principles of the Guide to good storage practices for pharmaceuticals of the WHO Technical Report Series No. 908, 2003. The guidance describing the special measures considered appropriate for the storage and transportation of pharmaceutical especially Premises and facilities such as:

The MoH, Binfar has developed a document pertaining to the proper specifications for the construction and repair of storage facilities, to serve as a guide in the design and estimation of the facility upgrade (in Bahasa) in 2005 but recently it is still developed and not published yet (might be published on 2012 or even later than 2012). Binfar is confident that the plans will be compliant to both WHO GSP and the national standard specification used until now.
Binfar specifications according to the national standard that was developed in 2005 regarding to reference book of Public Drug Facilities Standard/Buku Standar Sarana Penyimpanan Obat Publik dan Perbekalan Kesehatan (attached in Bahasa) emphasized the following technical considerations:

Screening Methodology
The cross cutting Health System Strengthening grants from the Global Fund round 10 have included the budgets for renovation of districts drug warehouses but the numbers were small compared to the actual existing warehouses in Indonesia. The Grant provides assistance for the upgrading plan of 100 warehouses in the 24 provinces/138 remote districts covered under the Project in 5 (five) years. In period of 2012 to 2014 (3 years of Grant) Binfar plan for a total of 60 warehouses to be upgraded.
As regards to the number of facilities to be upgraded per period, the following is the current target approved by GFATM:

This attempt of upgrading the warehouses is such a very collaborative effort involving many stakeholders. The Local Government Unit (Province and Districts targeted) likewise have pledges support to the upgrading efforts planned to be done. All these assistance will be synchronized, consolidated and considered in the overall facility upgrading project.

The Principal Recipient thru the Center of Data and Information of the Ministry of Health (Pusdatin-MoH) and The SR thru Binfar informed the facilities concerned of the availability of the funds for support to the renovation of their storage facilities. The facility owners were given the principles of the Good Storage Practices and existing national standard/guidelines as a guiding principle to identify and address the gaps in their facilities. The facilities then were asked to submit their work plans and bill of materials. The budget calculation based on local prices of each material and services since the program area are mainly remote, price variation of each place gives a significant differences. The SR thru monitoring activities and staff in province then checks the work plan against the principles of good storage practices as discussed above. Then the Principal Recipient and SR checked whether the province or district facility is already a recipient of grant support from specific allocation fund from governmental budget/DAK (If any such budget). If the latter is true, then it is checked whether the existing support will need further support from the grant to ensure that the basic tenets of good storage practices and national guidelines are met at the minimum.

Until October 2011, the SR already received 42 plans from different Districts compared to the target of 60 facilities. The development of the plans from the other facilities is currently on going with the consideration of the other external support that will be made available (there are 18 plans to be received before year 3 in phase 1).

The renovation is classified under two (2) categories; repair and extension of existing structure.

Most of the total 42 plans received were planned to both repair and extend its existing structure.
Summary of submitted plans is as follows:

Monitoring of Implementation
In view of existing guidelines released by Binfar-MoH in 2005 on storage specification, the SR agreed to monitor the implementation of the warehouse renovation project using the Grant in such periods with the supplement of national budget according to monitoring and evaluation toolkits developed by Binfar as well as compliant to the principle of GSP WHO. The SR and PR’s Project Officers in the areas will monitor the progress to ensure that the implementation of the renovation is done as per approved plan. Should there are any findings noted due to the monitoring at any level, the heads of facility, SR and PR will immediately be informed so that any corrective measures are done as soon as possible.
Costing
The estimated total cost of for the renovation of warehouses visited and evaluated is IDR19,216,712,046 or USD2,135,190 for 42 district warehouses against the original budget of IDR26,008,227,000 or USD2,889,803 for total of 60 district warehouses in three (3) years of GF HSS Grant. The average value of budget for 42 warehouses is IDR457,540,763 or USD50,838. The currency assumption using conversion of 1USD = IDR9000.
From the original target of 60 facilities and the submitted plan of 42 facilities for three (3) years Grant in this document, Binfar intend to submit the remaining targets not to exceed USD754,613 by end of June 2013. The same process of evaluation will be done for all plans received for warehouse renovation or extension and ensure that the plans received will not overlapping support provided by Local Government (DAK) and that the now considers any national guidelines as well as the GSP of WHO. 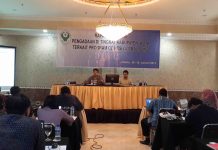 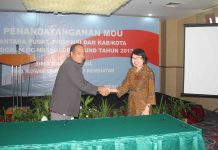